Who was going to tell us that melancholy could be a good partner for comedy? Or that an irreverent, respectful, and, above all, hilarious comedy could come out of a brand like Star Trek. But it is that we are facing an incredible moment for comedy: it can be far from the traditional sitcom, also from the dramatic model that prevailed in the last decade, and remain intelligent, witty, and above all funny.

In this list, there are seven series that are undoubtedly comedies, unquestionably good and that, in addition, are on the air or have been released in recent weeks:

Only murders in the building 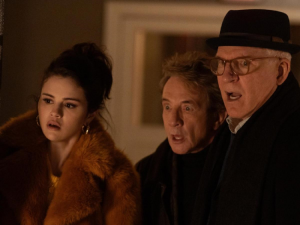 Mabel (Selena Gomez), Oliver (Martin Short), and Charles-Haden (Steve Martin) are three neighbors who barely greet each other if they meet in the elevator of their Manhattan building. But when they discover they’re lovers of the same true-crime podcast and suspect a dead neighbor on the estate may have been murdered, they team up to conduct their own folksy investigation.

With a mixture of humor and mystery, Steve Martin himself and John Hoffman, the creators of Only Murders in the Disney+ building, explore the emotional stagnation of three individuals who find a way out of their lives (and possibly to overcome their potholes). ). Who would have thought that a comedy could be very funny and at the same time be steeped in melancholy? With a city of New York that is one more character, the Only murder in the building is a torso (as we already said).

The Great North by Lizzie Molyneux-Logelin, Wendy Molyneux, and Minty Lewis is an animated series that has in common with Bob’s burgers, the family comedy about the Belchers. It’s no coincidence: the Molyneaux sisters have been writers and executive producers of Bob’s burgers since its inception in 2011 and Loren Bouchard, the man behind the burgers, is listed as executive producer of this new series set in Alaska.

And what does it offer again? Not much really. This is the good news. It is a family comedy with characters with their share of defects but united by the love they profess for each other, their desire to connect with each other, and the love they feel for the environment that surrounds them. It is, basically, Bob’s burgers with another geographical context and another family fabric. In this case, the Tobins narrate the adventures of a single father, his four children, and his new daughter-in-law. It’s adorable.

Many discovered the first season of Ted Lasso when it had already broadcast its first season on Apple TV + and, therefore, they had been able to binge. The optimism of Ted Lasso, a soccer manager who has no idea about the sport but who prioritizes the well-being of his players, represents the ideal series to recommend. And, with the arrival of the second season and its weekly broadcast, there are those who have wanted to find fault with it. Having Emmy for best comedy did nothing but increase the chances of complaints and criticism.

But the reality is that Ted Lasso remains an emotional comedy, with an overflowing good vibe, even when it gets into more dramatic terrain. You only have to watch the Christmas special or the episode that pays homage to romantic comedies (without being a romantic comedy) to understand to what extent those responsible dominate the good-roll universe. The final stretch of the second season points to interesting things about anxiety and mental health, not to mention that the series even disarmed toxic masculinity in one episode.

When the actress Amanda Peet had the idea to move to the script, she had two things very clear: that she would have the support of her husband to advise her (David Benioff, co-creator of Game of Thrones ) and that she wanted to start from the romantic comedy. This is how The Director of Netflix came out, a series about the new director of the English language department of a university in the United States, platonically in love with a co-worker who still loves his late wife and who soon discovers that his new position entails more obligations than you would like.

The credit to The Director is that Peet, who ultimately conceived the series with Annie Julia Wyman, the other creator, has written such a compact series. In six 30-minute episodes, he talks about machismo and racism in university institutions, mourning, people’s cultural identity, and the need for education to adapt to social changes and adopt new resources, voices, and points of view. . The director tells a lot and tells it with a great sense of humor.

What We Do in the Shadows

Nandor (Kayvan Novak), Laszlo (Matt Berry), and Nadja (Natasia Demetriou) arrived in New York in the 19th century with a mission: to destroy everything and turn the New Continent into vampire territory, where humans were only to supply them with food . . But they settled down, like the rest of the vampires, and today they live with an energy vampire named Colin Robinson (Mark Proksch) and Guillermo (Harvey Guillén), the human who helps them in the hope that they will turn him into a vampire.

At least this was the starting point for the first season of What We Do in the Shadows. What we do in the shadows dares to advance and the status of this quintet is not the same in New York in the third season broadcast by HBO, although it can be said that it remains in top form: it is a festival of humor starting from joking with terror and the absurdity that flourishes from having anachronistic beings in the present. Your visit to the Atlantic City casino is one of the funniest episodes of 2021.

Television sometimes has surprises in store for you. When word got out that CBS All-Access, which owns the rights to Gene Roddenberry’s Star Trek, was going to produce a half-hour animated comedy about the ship’s unnamed crew, the first idea that popped into the mind of the viewer is that it was a sacrilege that could bury the universe for the obsession to squeeze the rights of the franchise. It’s quite the opposite: Star Trek: Lower Decks is the most hilarious thing on television today.

Your secret? Crazy space adventures, a few doses of bad milk, some well-drawn personal dynamics on the USS Cerritos ship, and also a lot of sympathies: what unites the characters is friendship and their intention to be the best possible officers. It is unmissable, even for non-regulars to the Trekkie universe.