How to make movies if you are a beginner

If you have ever wondered how to make movies, you are in the right place. Although you won’t learn filmmaking techniques just by reading this article, we can give you some tips to immerse yourself in the amazing art of filmmaking.

There is no doubt that movies can transport us to a different reality and immerse us in a world created by a team of filmmakers. That’s why creating any type of visual content, whether it’s a 5-minute video or a 2-hour movie, takes a lot of work and preparation. 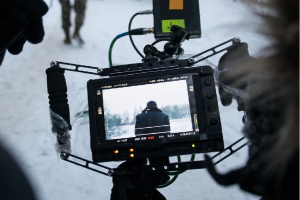 Before you turn on the camera, you’ll need to do some planning. It may take a bit more time, but it will definitely help you in the future.

First of all, you will need an idea. It sounds easy, but with so much to shoot, narrowing everything down to one subject can take a while. Think of the idea as the backbone of your film. Everything else will come out of it to make movies.

Here’s another tip: think of the end before the beginning. This is a tactic a lot of writers do because once you know the end result, it’s easier to track the story.

Knowing the format and the final destination of the video is also very important to make many other decisions. You should definitely decide this before you start creating your movie. For example, making a short film is very different from creating a YouTube video, and of course even more different than making a 2-hour long movie.

Once you have an idea, you need to write a script. Whenever you’re writing your script, keep in mind your goal: what the ending will be. Write some kind of map with the main actions and situations that will lead you to the desired end.

Another resource that filmmakers use is the storyboard. This is a visual representation, often illustrated, of the script. With it, you’ll start planning things other than the actual story, like shots, cutscenes, and more.

Having a script and storyboard doesn’t mean you have to strictly stick to them. You’ll still have time to improvise as you watch your story come to life, but with this planning, it would be easier to fine-tune details along the way.

A movie is nothing without its actors. Just think of any movie you’ve ever seen, chances are you’ll remember at least one person acting in it. These are the people who will bring your story to life, so you need to find the right ones.

Thanks to the Internet, today it is easier to carry out online castings. You can create an ad asking for actors and meet them through a video call. Or you can even get in touch with drama schools, as there are plenty of aspiring actors looking to get involved in projects.

You will also need to plan in advance where you are going to shoot. Is it going to be in a studio or will you shoot on location? If so, will it be in one place or several? These are all things you will have to think about and decide on before you shoot. Finding the right location to shoot is critical to production.

Part of pre-production is making sure beforehand that you have all the equipment you need to film. Have a list of all the things you need ready before you start creating your video. Test your cameras, microphones, tripods, and more to avoid surprises later.

Before you begin, check that your camera is ready. Make sure the battery is fully charged, the lens is clean, and there is enough free memory. It sounds basic, but you’d be surprised how many times things like this have happened to even the most professional filmmakers.

Try shooting with a tripod unless you want to intentionally give the scene a destabilized feel (a device many filmmakers use).

Add dynamism to your scenes

Make as many variations of scenes, angles, and perspectives as you can. This is important not only to give your story dynamism but it will also help you a lot when editing. Having all the material you can make things easier when editing.

Avoid using the zoom and leave it for post-production. Try to shoot in the best possible quality so that you can organize things later while editing. If, for example, you want to take a close-up, get as close as possible to the actor or object, instead of zooming in.

Pay attention to the lights

As much magic as you can do in post-production, always try to fix things while you shoot. Such is the case with lighting. While you can alter colors, contrasts, and more while editing if you don’t have good lighting, to begin with, the end result won’t be good.

Even more important than checking the lighting, is making sure the sound is perfect. This is even more difficult to fix in post-production, so try it before, during, and after shooting a scene. Be sure to read our article on diegetic sounds to see which ones to record while doing the scene and which ones to add later.

Modern cameras have many automatic features, but nothing beats doing things manually. Check and set the exposure and focus on yourself to avoid inconvenience during recording.

You may like to read The evolution of entertainment in society

During the months leading up to summer, many begin to wonder what they are going to do during the next vacation. For those who like to...

The evolution of entertainment in society

We live in a fast-paced society, where people run down the street as if the world is about to end. A frenetic pace of life can be seen...

Importance of outdoor recreation in children and adolescents

Quarantines have prevented minors from enjoying something as central to childhood as playing, interacting with other children, running, and...

9 super ideas to entertain children on a trip

As traveling parents and as our little ones have grown, we have looked for resources adapted for her to entertain during the trip....

Tips to improve the entertainment area in your home

Your home will surely benefit from having a designated entertaining area. Today, the entertainment area of ​​the house is the most used...