A year ago when I came to Turkey for my double Erasmus, to study and do an internship, since I had a lot of free time and out of boredom I started watching Turkish series. My mother also watches some in Romania, as the Turks have bought one of our channels and they broadcast Turkish series and movies. The truth is that the Romanian population, especially women, are crazy about Turkish series and they began to make some recommendations to me and I decided to start watching them see if they caught my attention. First I would watch the first episodes to see what they were like and then I would spend the nights locked in my room watching non-stop chapters of my favorite series. 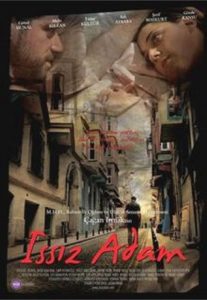 It’s a classic romantic movie about two men who fall in love with a girl and that’s when the drama begins … I don’t want to go into detail so you can see it on your own.

It is an incredible story about life and love. The two main characters have known each other since childhood and this makes for a fantastic story full of love and drama.

It is a comedy and the protagonist is a quite famous Turkish actor. It’s about a couple who break up and then get back together. It’s packed with comedy scenes, I couldn’t stop laughing throughout the movie, and it’s one of the best comedies in Turkey. You can go see it with your partner and thus be able to laugh together.

It is a very good romantic comedy. It is about a girl whose family pressures her to get married soon, time goes by and the pressure increases. She gets a job as a secretary and falls in love with her boss and he with her. I really liked this movie. It was great!

The title of the film already says it all and has two parts. It is about a group of boys and girls who are getting married and celebrate their bachelor parties. I really liked this movie and I hope they do the third party.

It’s crazy, I laughed a lot in all four movies. The protagonist is a fat boy whose things go wrong for him and in each part of the film he goes on a trip and crazy things happen to him. In the first film, he goes on a road trip to Antalya and has many adventures and makes people laugh until the end. The second movie tries to fulfill her grandmother’s wish to start a family and get a job and become a respectable person. In the third movie, he has to deal with his niece. He works in an advertising company and becomes famous, he participates in a program called “Survivor Turkey” and this was the best of all. I laughed a lot. They are worth the money.

My favorite Turkish actor, Burak Ozcivit, reappears in this film. It is about a love story that goes wrong, the couple breaks up and they get back together. I guess I never get tired of seeing this type of plot, but the truth is that I watched this movie because it was my favorite actor, so I enjoyed it a lot.

Great movie. It is a love and drama story about a blind girl who is in love with a boy she has never seen. You may miss a tear so be prepared. Make sure to watch it, it’s a great story.

Another story of love and drama as I like it. A deaf boy falls in love with a beautiful girl. It is a sad but very beautiful story. It is one of the best movie dramas in Turkey.

And now, the movie that I like the most since I’ve been to Turkey. It has a cast with my favorite actors Burak Ozcivit and Murat Boz (famous actor and singer) who play the role of two brothers after the death of their father. They take a car trip through Turkey, there is a journalist involved and many adventures. There is more romance than comedy, it is a great movie, one of the best there is. It came out last year so it’s pretty new.

I hope you watch at least one movie or series that I have recommended, I assure you that you will become addicted as soon as you see Turkish cinema. Don’t be put off by the fact that they speak Turkish, it’s easy to learn and you’ll get used to it! Enjoy!

You may also like to read: 10 Movies to discover Turkey