Comedy is one of the most personal genres of entertainment, as subjective and divisive as politics. Thank goodness for the vast Netflix library, which is here to meet all of our needs. Plus, there is nothing better than sitting on the couch or lying in bed with a few episodes of a good comedy series to unwind after a stressful day.

So that you can choose your next comedy series to do a marathon, here is the list of the 9 best comedy series that you can find on Netflix with the average of their IMDB, Filmaffinity, and Rotten Tomatoes scores. Each one has its own touch of romance, family, and even crime. 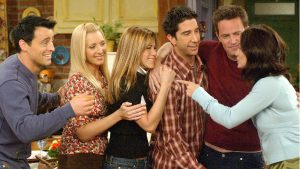 It has some outdated jokes, but for most of us, this series has a special place in our hearts. Whether you were watching for the love of Ross and Rachel, the goofy Joey, or Phoebe singing about smelly cats, it’s a series that defined a generation and can be seen again and again.

The series follows a mother-son duo navigating those awkward “conversations.” Of course, the mother here is a sex therapist.

Brooklyn Nine-Nine is not a deep dive into the psyche of police detectives and the criminal underworld; Instead, it’s an excellent playful comedy after the misadventures of immature, juvenile detective Jake Peralta, eager to impress Amy Santiago and a host of other quirky individuals under Stoic administration.

As it says in the title, it is about a family. To make it interesting, the family is extensive, divided between the family of the patriarch Jay (ruled by his curvy second Colombian wife), the offspring of his daughter Claire and the relationship of his son Mitchell.

The most dysfunctional family has made their home on Netflix. It is the story of a spoiled and once-wealthy family who carry on their lavish lifestyle even though they can no longer afford it.

Although she was told that this is because she has led a good and altruistic life, Eleanor knows that she is quite a terrible person and is only in this utopia due to the mistake of her architect.

Orange Is The New Black

It narrates the daily life of a group of women locked up in a female prison. It not only includes stories of betrayal, love, and violence, but it is also a critique of prison conditions in the United States.

When Sheila dies, their lives take a dark turn, Sheila turns into a hungry creature that devours human flesh. If you love black comedy, this is your series.

A series about a 29-year-old woman escaping from 15 years of forced confinement in a bunker, incarcerated by a doomsday cult leader, doesn’t sound like a barrel of laughter! But this is an oddly lighthearted and upbeat sitcom from the brilliant mind of Tina Fey.